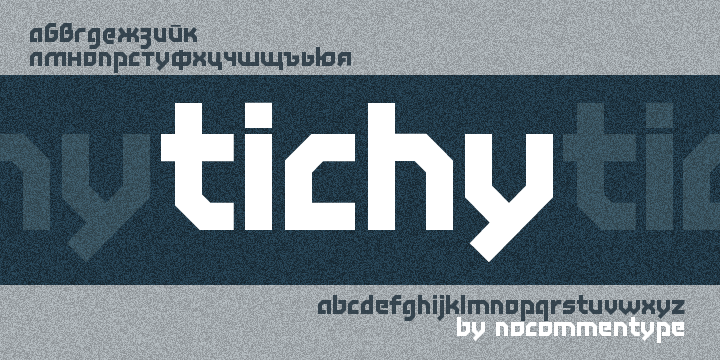 What is the Tichy font?

The “Tichy” typeface is intended for use in titles, headlines and in short text blocks, like citates. However, the typeface is legible even in larger text blocks. It’s strong appeal allows the typeface’s usage
mixed with other graphic elements of the layout without compromising it’s readability and it’s presence.
The typeface’s simple initial module (double braked at 135 degrees straight line), the strict rules of forming the letters lead to an unique typeface – masculine, strong and still legible. The Cyrillic
glyphs are influenced by the work of the great Bulgarian typographers Boris Angelushev, Vassil Yonchev and Alexander Poplilov, who developed Cyrillic further in 60-s and 70-s of the XX century. More…
Western, East European, Cyrillic, Baltic and Turkish codepages are supported. The font file contains all the basic ligatures, alternate glyphs and kern pairs. It can be used both on Windows and MacOS based
computers.
The history of “Tichy” typeface began many years ago with a project for logotype design for a small company. It was a kind of designer’s game to try making some letters just using one single module. Development of the other glyphs of the latin alphabet was for many years a mandatory exercise for the young colleagues in our studio.
Suddenly we realized that this project matured and creation of a new typeface started.

Here is a preview of how Tichy will look. For more previews using your own text as an example, click here.

No, every font we feature is a premium, paid-for font. Please don't waste your time looking for a free download of Tichy.

If you really want Tichy then click here to visit the download and purchase page on MyFonts to get it with the proper license. The designer and publisher deserves to be paid for their work. :)