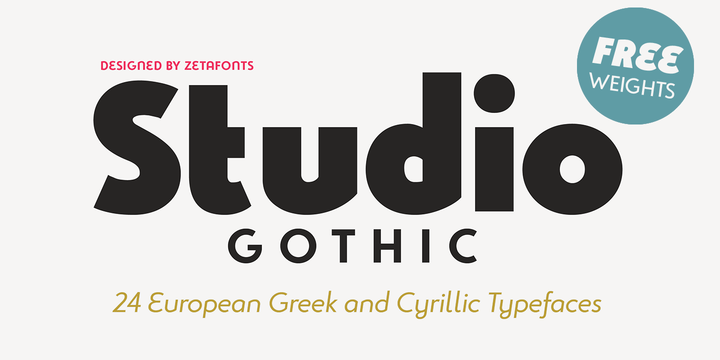 What is the Studio Gothic font?

Studio Gothic is a geometric sans typeface that takes inspiration from the ideas used by Alessandro Butti for his historical typeface Semplicità (simplicity in Italian) created in the 1930s. More…
More a reinvention than a revival, Studio Gothic keeps the minimal and bare design logic of the original typeface while proposing many original takes on letter shapes and proportions, with the aim to create a typeface that looks classic but unexpected, slightly modernist but still contemporary and fresh. These principles have been used also in the design of the companion italics, featuring slight calligraphic elements and making the italic weights suitable for display and logo usage. These same elements have been incorporated in the Studio Gothic Alternate family, giving you additional options to experiment with letter shapes and moods.
Each of Studio Gothic variant features a range of eight weights from thin to fat, coverage of over forty languages using the latin alphabet plus greek and Cyrillic and a wide array of open type features.

Here is a preview of how Studio Gothic will look. For more previews using your own text as an example, click here.

No, every font we feature is a premium, paid-for font. Please don't waste your time looking for a free download of Studio Gothic.

If you really want Studio Gothic then click here to visit the download and purchase page on MyFonts to get it with the proper license. The designer and publisher deserves to be paid for their work. :)