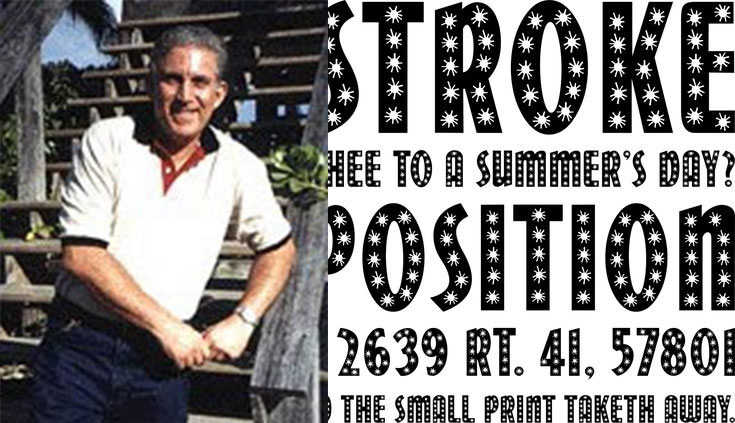 Jeff Levine is a type designer with a special passion for stencil types. With around 600 original fonts to his name, I couldn’t resist asking him about this obsession.

What appeals to you about stencil types?
It’s a valentine to what first got me interested in lettering as a school child.  A classmate had brought with him a Stenso Lettering Guide, and I was fascinated by how you could trace the outlines and make such nice letters.  I collected as many as I could at the time and began my lifelong love affair with lettering.  Over the years I’ve amassed [probably] the largest archive of Stenso products and I’m still in touch with Bob Libauer; who ran the company his sister (Ruth Libauer Hormats) had started.

Whenever I can, I add a new stencil face to my large collection of type at MyFonts.com, which currently numbers 600 offerings.

When designing a stencil face, what values do you strive for?
For me it’s the look and feel of vintage imperfection.  Stencils were generally made two ways:  hand-cut or die-cut.  My designs carry both the influence of the artist (the interpretation of the letter form) and the human look of lettering made by a hands-on method (ie: inconsistencies in stroke width or variation of a particular letter).  As most of my sources of inspiration were created way before the impact of computers on lettering and graphic design, none of the ‘refinements’ of laser-perfect type was present.  If a stencil letter had a horizontal stroke slightly higher or lower than a vertical one, or the thickness of a line stroke differed from another letter, chances are I’d replicate it the same way for visual effect.

Do you believe that stencils are fad or fashion?
Actually both.  A stencil font will always convey certain images such as military, industrial, architectural or strength.  When various effects are applied to a stencil font, other visual images apply.  Weathered stencil lettering on clothing is an example of a fad that’s been popular for a while.

What are your three most favorite stencil faces and why?
Of course, I’m partial to my own work, but that’s similar to having to choose a favorite child.  How do you do so?  If you insist that I pick three, I’ll defer to my childhood love of Stenso stencils and cite three fonts based on some of their oil board lettering guides… Book Report JNL, Shipped JNL and Western Adventure JNL.

How many have you designed?
Rough count… around sixty… and hopefully this collection will keep growing.

And why so many?
I once read the statement “a typeface is like a human face – each has its own distinct personality”.  The small nuances I’d mentioned of hand made or die-cut stencils, as well as the multitude of accompanying type styles for them made them worthy of preservation in digital format.  I believe many of my stencils fonts are purchased because they are decidedly different from the ‘standard’ designs that have been available for so long, and the current crop of designers want something that breaks the mold.  Even though most of my stencil designs come from vintage sources, they are still fairly fresh in the area of digital type.

This interview was conducted by Steven Heller in 2012 for imprint.PrintMag.com

X We use cookies on this website to give you the most relevant experience by remembering your preferences and repeat visits. By clicking “Accept All”, you consent to the use of ALL the cookies. However, you may visit "Cookie Settings" to provide a controlled consent.
We also use a number of ad partners. The full list can be seen on our privacy page or here.
We use your personal data / cookies, for personalisation of ads and that cookies may be used for personalised and non-personalised advertising. Read more on our privacy policy here
Read More Accept Cookie Settings
Manage consent