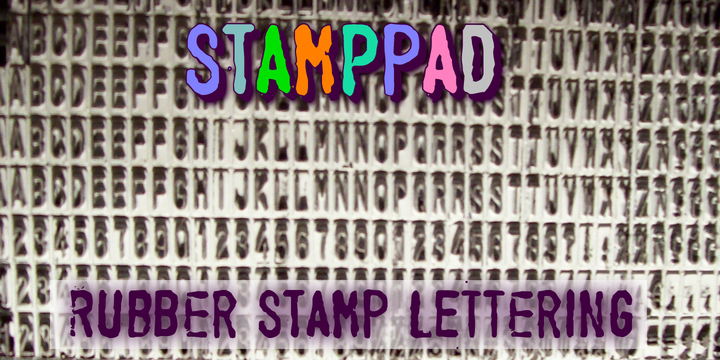 What is the Stamppad™ font?

Stamppad is a digitization of a rubber stamp pad, but with more than just the basics you’d get with a stamp-pad. It’s a family of six, and there’s a full set of punctuation and accented characters for just about all European Languages, and pretty much everything you’d expect from a fully-featured font. You’ll also see that it’s an All-Caps typeface – that’s what the actual stamp-pad was – and the Upper and Lower case characters are not identical.
The Regular version is – as you would expect – the normal ( and All-Caps ) version. More…
The Accents version is pretty much identical to the Regular version except for those accented characters where the accent is above the letter (like e-acute, N-tilde, U-dieresis and so on) – they have smaller base-letters so the total height is the same as their un-accented versions, rather than extending above.
The Small version has small lower-case letters (but they’re still upper-case, just smaller, like Small Caps).
The Black version is like a negative image, where the letters appear as white on a black background, and the Block version is the same but with space as a clear ‘white’ space, so that individual words will look like separate blocks, rather than being part of a continuous strip.
And the Shadow version is self-explanatory.
Also, with a layered graphics program like Photoshop and so on, you can put your text in the Black version, then Duplicate the layer on top of it with the Regular version and set different coloured letters, all on a black (or any colour or colours you choose) background quite easily, as you can see in the little flag image.
The fonts contain special characters for all double-letter combinations from aa to zz and AA to ZZ (using slightly different letter-shapes from the single versions) activated by enabling Standard Ligatures, and similarly for many common combinations like EA, ea, st, un, AT; which you get by enabling Discretionary Ligatures, for a bit of variety if required. This avoids too much repetition and can give a more natural look to the text or display. Also there’s Stylistic Alternates; Sups and Subs; fractions and slashed zero. There’s full details in the zip.

Here is a preview of how Stamppad™ will look. For more previews using your own text as an example, click here.

No, every font we feature is a premium, paid-for font. Please don't waste your time looking for a free download of Stamppad™.

If you really want Stamppad™ then click here to visit the download and purchase page on MyFonts to get it with the proper license. The designer and publisher deserves to be paid for their work. :)