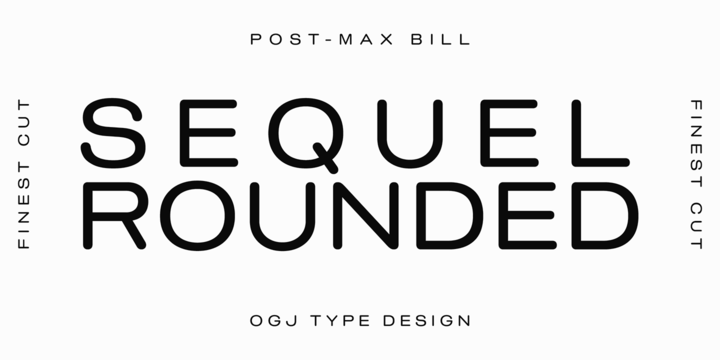 What is the Sequel Rounded font?

Unfortunately we rarely meet typefaces which still show the formal quality of the time of our grandfathers or even the technical progress in their interior with the design of their exterior.
A rare example is Sequel Rounded whose shapes combine clarity and simplicity.
Sequel Rounded is a post-Max Bill font by OGJ type design, berlin, and is developed in close cooperation with the Max Bill Georges Vantongerloo foundation in switzerland. More…
MAX BILL
Last universal scholar, most important design teacher of the 20th century:
There are superlatives, always very enthusiastic, when the importance of Max Bill is discussed. The trained silversmith studied at the Bauhaus, with personalities such as Josef Albers, Paul Klee and Oskar Schlemmer. He worked as an architect, later as sculptor and designer.

Here is a preview of how Sequel Rounded will look. For more previews using your own text as an example, click here.

No, every font we feature is a premium, paid-for font. Please don't waste your time looking for a free download of Sequel Rounded.

If you really want Sequel Rounded then click here to visit the download and purchase page on MyFonts to get it with the proper license. The designer and publisher deserves to be paid for their work. :)