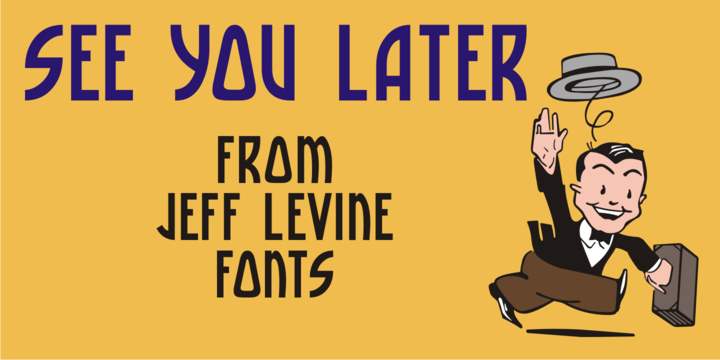 What is the See You Later JNL font?

The sheet music cover of Lew Brown and Albert Von Tilzer’s 1917 wartime song “Au Revoir, But Not Goodbye (Soldier Boy)” had its title hand-lettered in a condensed sans serif design with the influence of Art Nouveau styling.
This has now been re-drawn digitally as See You Later JNL.

The See You Later JNL includes the following font families:

Here is a preview of how See You Later JNL will look. For more previews using your own text as an example, click here.

No, every font we feature is a premium, paid-for font. Please don't waste your time looking for a free download of See You Later JNL.

If you really want See You Later JNL then click here to visit the download and purchase page on MyFonts to get it with the proper license. The designer and publisher deserves to be paid for their work. :)