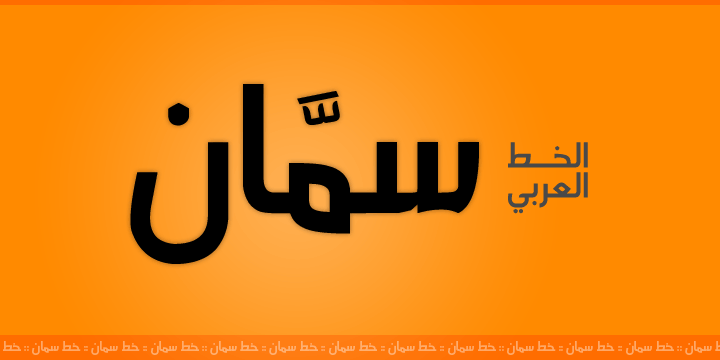 What is the Samman font?

“Samman” is a Kufic simple Arabic typeface. It can be used to decorate public signs in streets, airports, hospitals, schools, malls, hotels, mosques, and other public places.
My family’s surname is “Samman” which stands for the person who sells fat especially the one produced by cows (“Samn” in Arabic). Consequently, “Samman” Typeface was designed for eternizing the memory of my family. More…
The main characteristic of “Samman” Typeface is the leaf-shaped style for some of its Arabic characters such as “Dad”, “Sad”, “Faa”, “Meem” and others. The distinguishing artistic design of its “Haa” character adds a unique feature to this typeface especially when connected with other characters. The shape of the characters’ “dot”, “dots”, and “point” is innovative; a triangle with a semi-circle shape.
“Samman” Typeface is suitable for books’ covers, advertisement light boards, and titles in magazines and newspapers. Its characters’ modern Kufic styles give the typeface more distinction when it is used also in posters, greeting cards, covers, exhibitions’ signboards and external or internal walls of malls or metro’s exits and entrances. It can also be used in titles for Arabic news and advertisements appeared in different Arabic and foreign satellite channels.

Here is a preview of how Samman will look. For more previews using your own text as an example, click here.

No, every font we feature is a premium, paid-for font. Please don't waste your time looking for a free download of Samman.

If you really want Samman then click here to visit the download and purchase page on MyFonts to get it with the proper license. The designer and publisher deserves to be paid for their work. :)