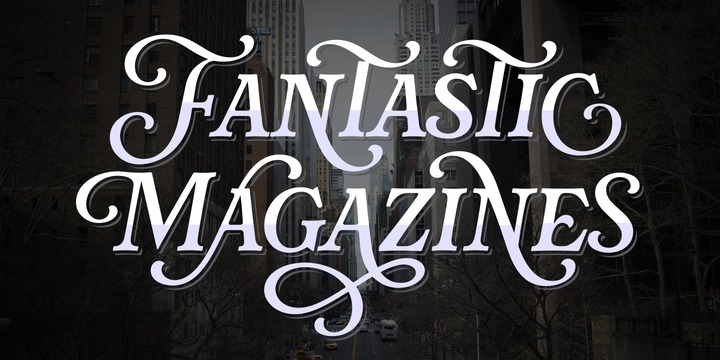 What is the Rafaella font?

To Rafaella, a menina dos cachos.
We, designers, have grown accustomed to seeing that lowercase letters—not only in calligraphy but also in typography (1)—may be very playful and decorative. Almost every part of them can become a potential swash, ligature or decorative accolade (2) if the designer has some expertise regarding this matter. More…
However, since we are living in an era that elevates the status of handcrafts, lettering has gained a lot of ground in different kinds of mediums, and with it there’s a sort of overuse of capitals. This may be due to the reason that lettering pieces need a high impact to convey their messages and many times why big capitals are the only solution.
With this in mind, I started Rafaella: A font consisting entirely of capitals which go from unadorned to very decorative.
Rafaella has ductus and forms vaguely based on the 1970s Bookman-like styled fonts. The presence and behaviour of serifs and ball terminals in this style were the perfect excuse to make really attractive aternates which the user can choose from the glyphs panel.
The result is a font full of life. Able to be both very playful and formal due to its roman style which can be combined with (and between) a wide range of other styles of expressive scripts or geometric fonts with nice results (3).
Also try Rafaella Shade Solo combined with Rafaella or Rafaella Bold for a layer effect to emphasize any given word or phrase.
NOTES
(1) See my fonts Erotica from 2013 or Dream from 2014.
(2) Accolades is a wonderful word that refers to the ornaments made around the words in the spencerian style of calligraphy
(3) Combinations often seen in different pieces of lettering were usually a contrast of style is wanted.

Here is a preview of how Rafaella will look. For more previews using your own text as an example, click here.

No, every font we feature is a premium, paid-for font. Please don't waste your time looking for a free download of Rafaella.

If you really want Rafaella then click here to visit the download and purchase page on MyFonts to get it with the proper license. The designer and publisher deserves to be paid for their work. :)