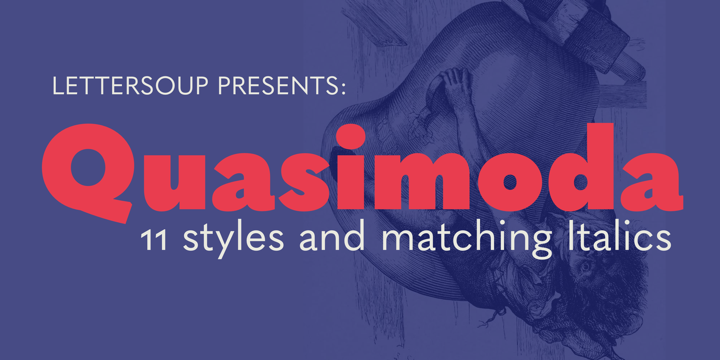 What is the Quasimoda font?

Quasimoda is the “almost fashionable” sans serif family with 11 weights and matching italics. It combines fashionable geometric forms with old-fashioned classical proportions. Berlin-based Botio Nikoltchev (Lettersoup) designed Quasimoda so that the lighter weights give off a fresh, modern feel, the middle weights provide excellent readability and elegance for longer texts, while the boldest weights introduce a slightly antiquated flair. More…
Partly geometric, partly grotesque, Quasimoda is a versatile beast. It follows the current fashions but does not completely give into them, retaining classical proportions and the slight ugliness of the 19th-century grotesques. With its long descenders and its small x-height, Quasimoda combines well with Renaissance serif fonts such as Garamond’s, or it can serve itself as a leading body font for longer texts, as well as a variety of branding, headline and display purposes. Quasimoda includes characters for more than 80 Latin-script languages, and several sets of figures available as OpenType features.
To continue with the lettersoup tradition , one style of Quasimoda is available free of charge.

Here is a preview of how Quasimoda will look. For more previews using your own text as an example, click here.

No, every font we feature is a premium, paid-for font. Please don't waste your time looking for a free download of Quasimoda.

If you really want Quasimoda then click here to visit the download and purchase page on MyFonts to get it with the proper license. The designer and publisher deserves to be paid for their work. :)