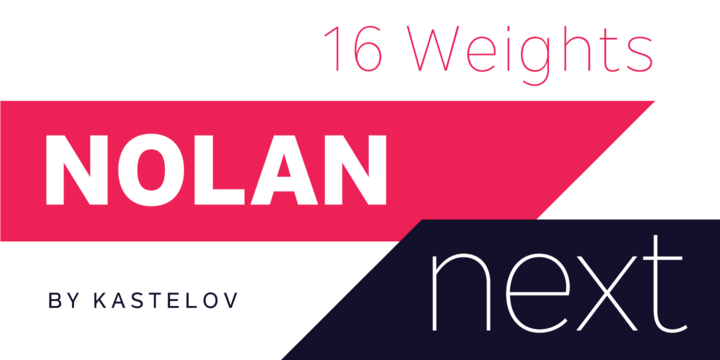 What is the Nolan Next font?

Nolan Next is a low-contrast humanist sans-serif with a large x-height and streamlined appearance. It is based on Nolan, but with a more compact letterforms and remastered curves. Designed to appeal to a broader audience due to its narrower width and subtle presence, Nolan Next is ideal for everyday usage. It is well suited for design applications ranging from branding and corporate identity to editorial and web design.

Comprising of eight weights with matching italics, Nolan Next is easy to work with and accommodating to your needs. Designed to work as a universal typeface, it also stands its ground in headlines, presentation materials, logotypes, etc. Additionally, the typeface includes an extended character set supporting an array of languages.

The Nolan Next includes the following font families:

Here is a preview of how Nolan Next will look. For more previews using your own text as an example, click here.

Who designed Nolan Next font?

Nolan Next font was designed by Kastelov. His background is in corporate identity and branding. One approach that he tries to follow in the work that he does is his strive for subtlety and simplicity. The great Dieter Rams summed this up really well in his phrase “Less, but better”. The catch of course is that this is easier said than done, and it requires you to be more attentive and strategic about what is essential and what is not.

No, every font we feature is a premium, paid-for font. Please don't waste your time looking for a free download of Nolan Next.

If you really want Nolan Next then click here to visit the download and purchase page on MyFonts to get it with the proper license. The designer and publisher deserves to be paid for their work. :)