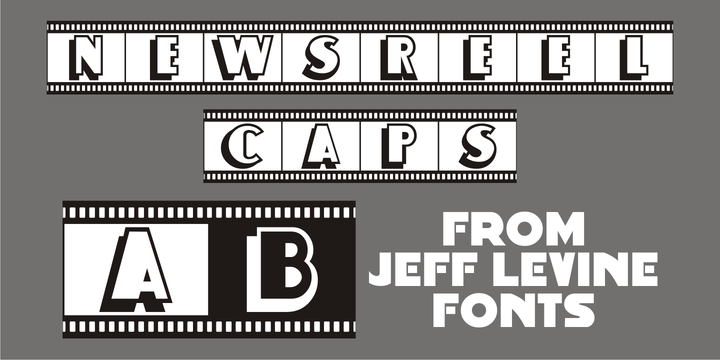 What is the Newsreel Caps JNL font?

Newsreel Caps JNL is a novelty caps-only outline letter with cast shadow set inside film frames. Although the design idea itself is not new, this version is based on lettering from a vintage piece of sheet music for a song featured in the movie “Fox Movietone Follies”.
The font is a wink and nod to Fox’s long-running newsreel series called “Fox Movietone News”. The upper case keys have black letters on a white frame, while the lower case keys have white letters on a black frame.
A blank white frame is on the period key; a blank black frame is on the comma key. More…
Use this font for individual initials, set the characters loose for effect or set them tight (as provided) for a continuous film strip.

Here is a preview of how Newsreel Caps JNL will look. For more previews using your own text as an example, click here.

No, every font we feature is a premium, paid-for font. Please don't waste your time looking for a free download of Newsreel Caps JNL.

If you really want Newsreel Caps JNL then click here to visit the download and purchase page on MyFonts to get it with the proper license. The designer and publisher deserves to be paid for their work. :)