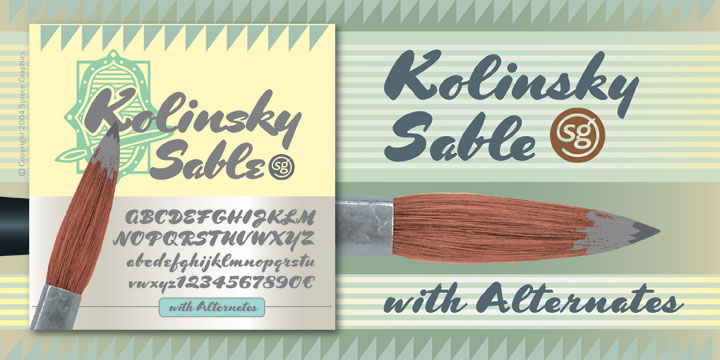 What is the Kolinsky Sable SG™ font?

Here’s what happens when you use a fully-loaded Asian mink Kolinsky brush to imitate an old script letter style of the World War II era.
Originally published in 1944, Charles P. Bluemlein’s enchanting design has the same bounce, warmth, and charm found in many old magazines and movie titles of that period. Two digital versions are provided in the set. Kolinsky Sable Heavy with Alternates retains Bluemlein’s original heavy, contrasting capital letters. However, some modifications, such as less severe slanting and looser letterspacing, are also present. You will find this version very helpful when setting in small sizes. More…
If you prefer the tighter, brush-lettered look of the times, try Kolinsky Sable Two Heavy. Caps are somewhat lighter making for generally better color overall. This version is ideal for headlines and logos. Alternate capital and lowercase characters plus an alternate set of small numbers have been provided. Fine-tuning is possible since many lowercase characters are interchangeable.
Kolinsky Sable Heavy and Kolinsky Sable Two Heavy are now available in the OpenType Std format. Some new characters have been added to these OpenType versions including stylistic alternates and historical forms. These advanced features work in current versions of Adobe Creative Suite InDesign, Creative Suite Illustrator, and Quark XPress. Check for OpenType advanced feature support in other applications as it gradually becomes available with upgrades.

Here is a preview of how Kolinsky Sable SG™ will look. For more previews using your own text as an example, click here.

No, every font we feature is a premium, paid-for font. Please don't waste your time looking for a free download of Kolinsky Sable SG™.

If you really want Kolinsky Sable SG™ then click here to visit the download and purchase page on MyFonts to get it with the proper license. The designer and publisher deserves to be paid for their work. :)