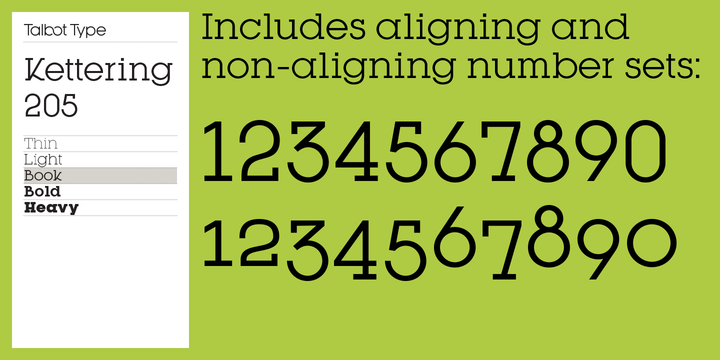 What is the Kettering 205 font?

Kettering 205 is a geometric slab-serif with Art Deco influences, such as lowered crossbars on many characters, a distinctive oblique crossbar on the lower case e, and a crossed W.
It includes old style non-aligning (lower case) numbers, both proportional and tabular as well as accented characters for Central European languages.
It’s a highly individual looking font, but retains good legibility coupled with striking looks as a display font. The Kettering 205 family comprises of five weights and is closely related to Kettering 105, its less Deco flavoured cousin.

Here is a preview of how Kettering 205 will look. For more previews using your own text as an example, click here.

No, every font we feature is a premium, paid-for font. Please don't waste your time looking for a free download of Kettering 205.

If you really want Kettering 205 then click here to visit the download and purchase page on MyFonts to get it with the proper license. The designer and publisher deserves to be paid for their work. :)