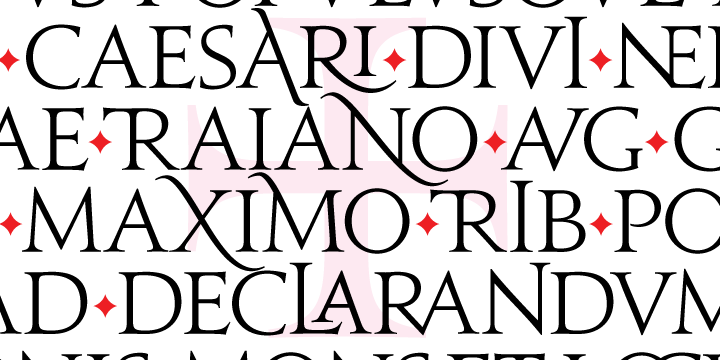 What is the Jupiter Pro™ font?

At the height of the Roman Empire’s reign of power, a bunch of guys wearing baxas, olive branch headgear and lined saffron togas told a bunch of guys wearing carbatinas, no headgear and cheapo coarse togas to go and hammer the proud history of the Empire onto every worthy slab of rock, obelisk and wall out there. This resulted in countless rocky manifestations of ancient clipart, interesting stories and weird messages becoming national tourist attractions and museum dressing all over the world to this very day, which is some 2000 years later. More…
One of the constants in all the hammered history of Roman times is the alphabet used to caption the clipart or tell the stories. That Roman/Latin alphabet, which was a direct spawn of the Greek alphabet, just happens to be the same one the majority of the world still uses today. Records showing what the letters of that alphabet looked like during Roman times seem quite consistent in depicting the overall forms, but vary wildly when it comes to the slight variations introduced by whoever drew the forms. For a random example, sometimes the M had straight legs and two serifs up top, and at other times it had splayed legs and pointy, serifless tops. Ditto the N. And sometimes when the rock slab’s length was misjudged by the guy with the hammer, he sneakily blended two or more letters together, or enveloped one letter within another. Those guys had to do such things to save space. It was either trick it out like that or go out again and risk a sunstroke while trying to find another smooth slab (or steal someone’s roof). It was just their bloody luck that their leaders wouldn’t settle for simple minimalist stuff like Stonehenge.
Anyhow, those Roman letter forms came to be later known as capitals (not to be confused with large sums of money or cities where government building are a-plenty). And the space-saving, letter-jamming tricks came to be later known as ligatures (not to be confused with surgical procedure or sadomasochistic gear).
Lo! We’re getting carried away with this stuff. Here’s the font’s real blurb:
Jupiter is a take on the Roman alphabet the way it looked in Roman times. It is also influenced by many different historical interpretations of the Roman alphabet, most notably the work of Friedrich Poppl, whose rough Nero typeface was a very beautiful expression, though a bit too calligraphic in concept.
Jupiter comes in all popular font formats for both Mac and PC, and supports more than 40 Latin-based languages, as well as Greek. The True Type versions include a font of alternates and a font of ligatures, both filled to the brims with interesting variations on the main character set. Jupiter Pro, the OpenType version, is a single font tied together with programmed features, and is best used within software programs that support advanced typography, like Adobe InDesign CS+, Adobe Illustrator CS+, and QuarkXpress 7+.

Here is a preview of how Jupiter Pro™ will look. For more previews using your own text as an example, click here.

No, every font we feature is a premium, paid-for font. Please don't waste your time looking for a free download of Jupiter Pro™.

If you really want Jupiter Pro™ then click here to visit the download and purchase page on MyFonts to get it with the proper license. The designer and publisher deserves to be paid for their work. :)