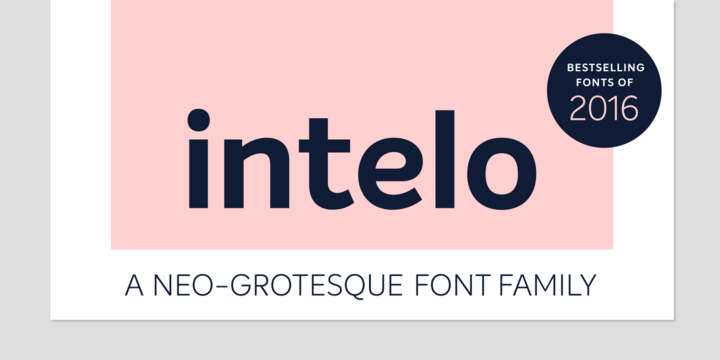 What is the Intelo font?

Intelo was created with the single idea of redefining what makes a functional grotesque typeface nowadays. Its large x-height and letterforms with subtle elliptical finish create a distinctive look that can help brands cater to an increasingly design savvy audience. To top it off, Intelo comes in two versions – an attention-grabbing original cut and an additional version with flat endings for a more streamlined effect.

The family weights range from thin to extrabold with matching italics making it a versatile choice and perfectly suited for digital applications including web and interaction design as well as printed media such as editorial and corporate materials.

When it comes to Opentype features, Intelo is loaded with stylistic alternates, tabular figures, fractions, ligatures, and more. In addition, the font family has an extended language support featuring Western, Eastern and Central European languages.

To sum it up, the friendly and inviting letterforms of Intelo came as a solution to the need for more human fonts in our technology-oriented environment.

Here is a preview of how Intelo will look. For more previews using your own text as an example, click here.

Intelo font was designed by Kastelov. His background is in corporate identity and branding. One approach that he tries to follow in the work that he does is his strive for subtlety and simplicity. The great Dieter Rams summed this up really well in his phrase “Less, but better”. The catch of course is that this is easier said than done, and it requires you to be more attentive and strategic about what is essential and what is not.

No, every font we feature is a premium, paid-for font. Please don't waste your time looking for a free download of Intelo.

If you really want Intelo then click here to visit the download and purchase page on MyFonts to get it with the proper license. The designer and publisher deserves to be paid for their work. :)