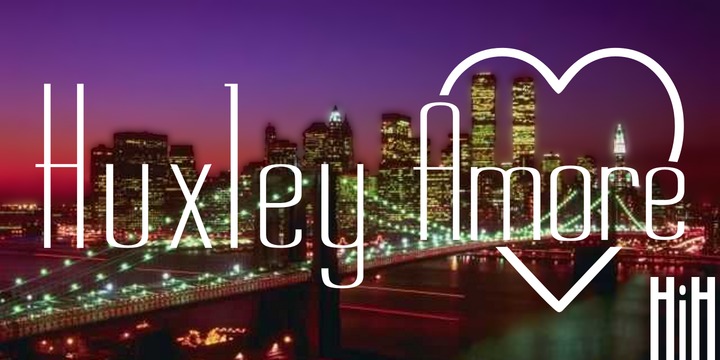 What is the Huxley Amore font?

Huxley Amore is a major extension of our earlier font, Huxley Alt. Huxley Alt was was designed as an alternative to Huxley Vertical, with the addition of a lower case and with a lighter horizontal stroke than vertical. Huxley Amore is designed to do double-duty:
1. Huxley Amore is a family of five fonts, made up of Timid, Timid Inclined, Bold, Bold Inclined & Extra Bold, all with Unicode coding. There are more than 365 characters in each individual font, including all 128 accented letters that comprise the Latin Extended-A coding set. That means that languages formally covered by the WIN 1250 Central European code set are accomodated by the family, including Albanian, Czech, Croatian, Estonian, Hungarian, Latvian, Lithuanian, Polish, Romanian, Slovak and Slovenian. More…
2. Huxley Amore is a holiday face. Included are ten special holiday glyphs for St. Valentine’s Day, including a heart-shaped bullet, a heart-shaped Smiley Face and the ligatures LOVE and, of course, AMORE. Amore is Italian for love. French is certainly not the only “romance” language. Many years ago I met a middle-aged man at the railroad station in Venice. I was traveling with a college buddy & the man recognized us as Americans and engaged us in conversation. Turns out he had lived in Detroit for a number of years before moving back to Italy. He was a fan of Rock-n-Roll and had a big collection of 45s (this was 1965). But what I remember most is the lyrical quality with which he spoke Italian. He was slightly rotund and his words were as round as he was — they just rolled along with a spirit of joy. To me joy is romantic and wants to be shared. It is not manufactured and it is not over-done. It is just simple and direct and infectious. That is why I think Huxley Amore is a great choice for expressing romantic thoughts. Huxley Amore is visually simple and direct and yet sophisticated and unexpected. Those are the qualities that give it such freshness in this context.
Highly condensed. Set it large or lose it.
See the gallery image for examples of how to say, “I love you” in various European languages. See if you can find yours.

Here is a preview of how Huxley Amore will look. For more previews using your own text as an example, click here.

No, every font we feature is a premium, paid-for font. Please don't waste your time looking for a free download of Huxley Amore.

If you really want Huxley Amore then click here to visit the download and purchase page on MyFonts to get it with the proper license. The designer and publisher deserves to be paid for their work. :)