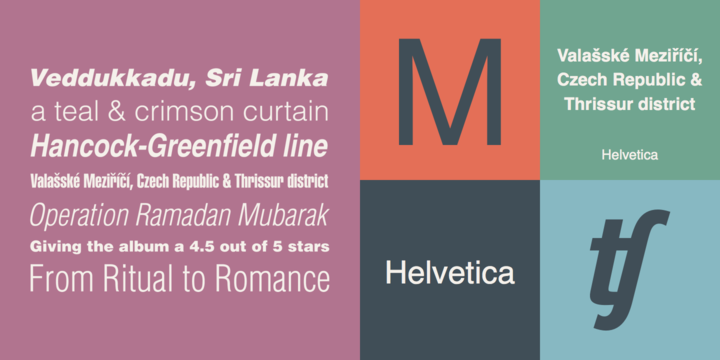 What is the Helvetica® font?

This typeface was initially released as Neue Haas Grotesk, and was designed in 1957 by Max Miedinger for the Haas’sche Schriftgiesserei (Haas Type Foundry) in Switzerland.
The name was changed to Helvetica (an adaptation of Helvetia, the Latin name for Switzerland) by Walter Cunz when D. Stempel AG, a major stockholder in Haas, reworked the design for Linotype GmbH in Frankfurt, a major stockholder in Stempel. The Mergenthaler Linotype Company in New York, then a major stockholder of Linotype GmbH, adopted the design, and it rapidly became the most popular sanserif in the world, replacing Futura. More…
Helvetica is designed as a strong central series, with condensed and extended forms and extreme weights adapted and added later, a system which suited Linotype mechanical limitations and marketing philosophy, but which resulted in a family of weights that were not as well coordinated as they might have been.
Linotype’s limited licensing forced a large number of unauthorized copies of Helvetica, none of which may be viewed as an improvement.

Here is a preview of how Helvetica® will look. For more previews using your own text as an example, click here.

No, every font we feature is a premium, paid-for font. Please don't waste your time looking for a free download of Helvetica®.

If you really want Helvetica® then click here to visit the download and purchase page on MyFonts to get it with the proper license. The designer and publisher deserves to be paid for their work. :)