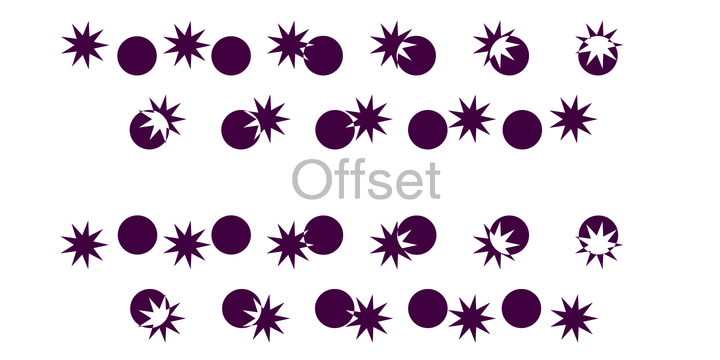 What is the Heavenly Bodies font?

All 6 fonts use the characters A – K and a – k to show two planets/stars/moons moving across each other. Nice and simple.
There’s a different number of points on the stars, or they’re different sizes, and some appear to pass left-to-right, and some appear to pass the other way. Just type in ABCDEFGHIJK or abcdefghijk and you’ll see. More…
Two fonts have all the characters on the same level, (All-Black and Black+White). The Offset font has the ‘sun/moon’ with one slightly above the other and in black and white, and Half has them all-black. Partial has them even further separated in 2-tone. NearMiss is a very close shave.
Comma, hyphen, and full stop/period give just a single symbol; there’s a Space, and that’s it.

Here is a preview of how Heavenly Bodies will look. For more previews using your own text as an example, click here.

No, every font we feature is a premium, paid-for font. Please don't waste your time looking for a free download of Heavenly Bodies.

If you really want Heavenly Bodies then click here to visit the download and purchase page on MyFonts to get it with the proper license. The designer and publisher deserves to be paid for their work. :)