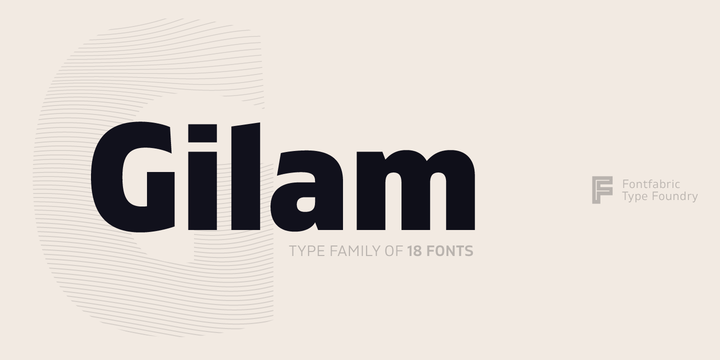 What is the Gilam™ font?

Gilam is a sans serif font with semi-condensed proportions. The typeface was based on the famous DIN but combines its popular neo-grotesque look with characteristics, such as the pointed edges in the “W” and “M” as well as the outward cut terminals, which gives a distinctive look to the modern geometric typeface. The complete set of 9 weights plus italics gives to designers the absolute freedom to create anything. Perfect layouts with blocks of text, headlines, motion graphics, logos, apps, and websites are just part of the intended usage of this versatile typeface.
Features: More…
• 765 glyphs in 18 styles;
• Extended Latin, Cyrillic and Greek;
• Geometric forms and low contrast;
• Prominent x-height which makes it legible in a text;
• Perfect for headlines and logos;
• Suitable for web, print, motion graphics etc.
• Semi-condensed proportion;
• Advanced typographical support and OpenType features including case-sensitive forms, fractions, superscript and subscript characters, and stylistic alternates;
• Complete set of figures – old style and lining figures, which come with proportional and tabular variation;
Gilam means “joy of people” so that you can enjoy it!

Here is a preview of how Gilam™ will look. For more previews using your own text as an example, click here.

No, every font we feature is a premium, paid-for font. Please don't waste your time looking for a free download of Gilam™.

If you really want Gilam™ then click here to visit the download and purchase page on MyFonts to get it with the proper license. The designer and publisher deserves to be paid for their work. :)