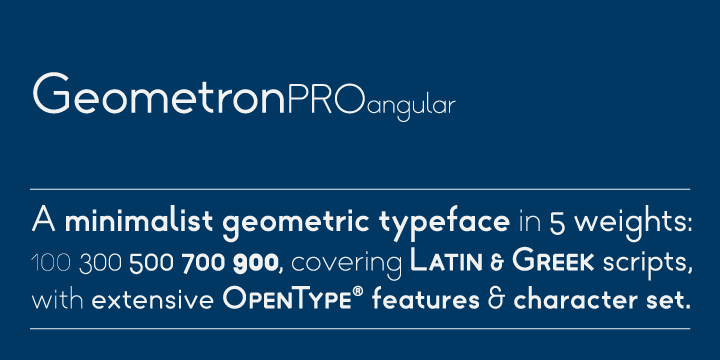 What is the Geometron Pro Angular font?

Geometron has its origin in a custom typeface that I was commissioned to design for an architectural project. The concept was a “back to basics”, minimalist typeface constructed mainly with straight lines and circles or circular arcs, but without departing from the classical style of Roman & Greek lettering.
Notable requirements were: an extensive character set needed for multi-language documentation, as well as a full collection of symbols and alternate glyph forms (e.g. superiors & inferiors) for scientific use. Special care was taken to obviate the almost identical similarities that were prone to appear between letters like uppercase “i” and lowercase “L” or between Latin and Greek letters such as “a” and “alpha”. This was also a prerequisite for scientific notation where ambiguity is not acceptable. More…
All in all, the font would have to blend a modern design with a wealth of functional features. Consequently, all of these were made possible by choosing the OpenType format for development, resulting in a comprehensive and feature-rich font family specifically targeted for use in high-end design/typesetting applications.

Here is a preview of how Geometron Pro Angular will look. For more previews using your own text as an example, click here.

No, every font we feature is a premium, paid-for font. Please don't waste your time looking for a free download of Geometron Pro Angular.

If you really want Geometron Pro Angular then click here to visit the download and purchase page on MyFonts to get it with the proper license. The designer and publisher deserves to be paid for their work. :)