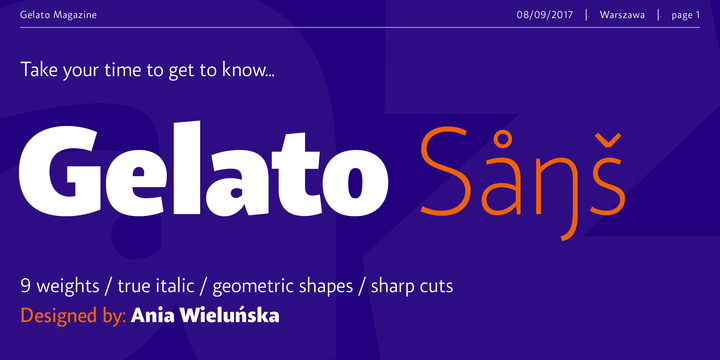 What is the Gelato Sans font?

Gelato is the Italian word for ice cream, commonly used in English for ice cream made in an Italian style. Gelato Sans designed by Ania Wieluńska is a humanistic typefacewith geometric construction. It is characterised by a lot of details, which gives it a friendly and warm character. Scalable and large xheight, sharp cuts makes Gelato good choice for many purposes from textes to display usage. All family consist 18 styles with italics from hairline to black. Ania’s Gelato Sans was awarded a TDC Beatrice Warde Scholarship. Buon appetito!

Here is a preview of how Gelato Sans will look. For more previews using your own text as an example, click here.

No, every font we feature is a premium, paid-for font. Please don't waste your time looking for a free download of Gelato Sans.

If you really want Gelato Sans then click here to visit the download and purchase page on MyFonts to get it with the proper license. The designer and publisher deserves to be paid for their work. :)