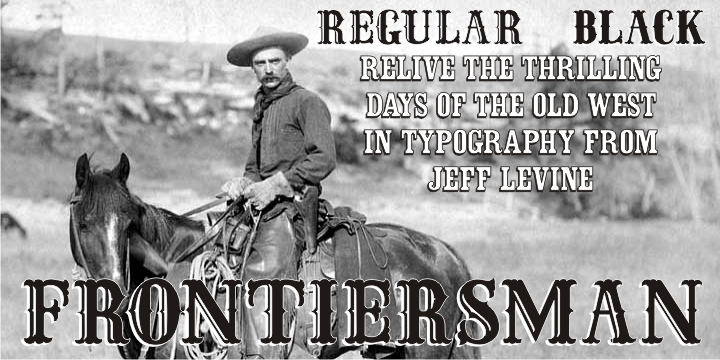 What is the Frontiersman JNL font?

The pages of the Speedball® Lettering Textbook have yielded a number of classic typefaces for digital designers. Frontiersman JNL and Frontiersman Black JNL have the wonderful hand-lettered look that adds just the right touch of nostalgia to any layout.

Here is a preview of how Frontiersman JNL will look. For more previews using your own text as an example, click here.

Jeff Levine has been in love and completely obsessed with lettering since the third grade. This occurred when a school friend brought a lettering stencil into school.

Jeff worked in both the graphics and music industries. He began his work with digital type via his own site, which hosted over one hundred free dingbat fonts until its retirement in 2009.

Although these fonts were experimental at best, Jeff received “thank you” letters from points all over the world for making his designs available. Encouraged by these responses, Jeff decided to set his sights on creating interesting and commercially viable type fonts.

Jeff has designed some awesome fonts over the years. He’s one of the most prolific font designers in the world with well over 1800 fonts listed on MyFonts.

No, every font we feature is a premium, paid-for font. Please don't waste your time looking for a free download of Frontiersman JNL.

If you really want Frontiersman JNL then click here to visit the download and purchase page on MyFonts to get it with the proper license. The designer and publisher deserves to be paid for their work. :)