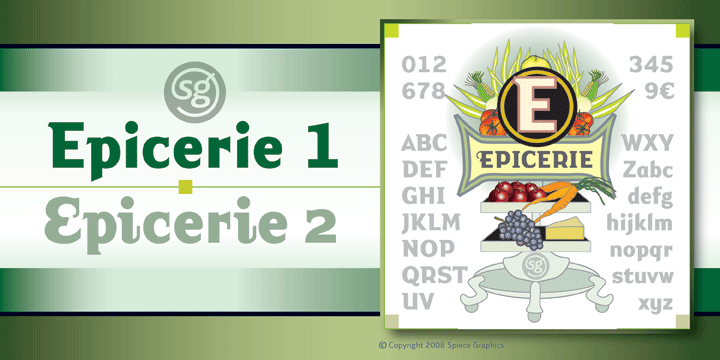 What is the Epicerie One & Two SG font?

This typeface is derived from capital letters found on an old grocery store sign in southern France. The word épicerie means grocery in French.
Epicerie’s personality remains mostly in the past with a few spontaneous contemporary nuances.
It comes bundled in two convenient styles: Epicerie One for general use and Epicerie Two for fancy occasions. You might try combining characters from both fonts to produce captivating headlines or unique logotypes. More…
Magnifique!
Epicerie One & Two is also available in the OpenType Std format. Some new alternate characters have been added to this OpenType version. Advanced features currently work in Adobe Creative Suite InDesign, Creative Suite Illustrator, and Quark XPress 7. Check for OpenType advanced feature support in other applications as it gradually becomes available with upgrades.

The Epicerie One & Two SG includes the following font families:

Here is a preview of how Epicerie One & Two SG will look. For more previews using your own text as an example, click here.

No, every font we feature is a premium, paid-for font. Please don't waste your time looking for a free download of Epicerie One & Two SG.

If you really want Epicerie One & Two SG then click here to visit the download and purchase page on MyFonts to get it with the proper license. The designer and publisher deserves to be paid for their work. :)