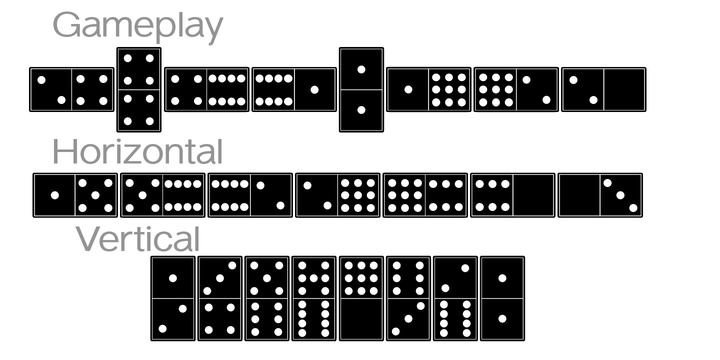 What is the Dominoes™ font?

There’s 100 dominoes in this font, with all possible combinations from double-blank to double-nine. Just type in the two numbers of the domino you want (such as 25 for two-five, or 52 for five-two) with Ligatures on, and you’ll get the domino you want. There’s also the letters, numbers and punctuation. (see below for more) You would need a program with Open-Type features to do this – most modern graphics and word-processing programs have this feature. More…
There’s seven styles – which come as Horizontal; Vertical; and Gameplay – in either Black or White. The Horizontal version has all the dominoes showing horizontally, the Vertical version has them all appearing vertically, and the Gameplay version replicates actual gameplay where the doubles are at 90 degrees to the other dominoes. You can see this on the images in the gallery. And there’s an Alternative version of the Gameplay black version but with a different pattern on the number 7 and 8 dominoes.
The best way to access the characters is to set Ligatures to ‘On’ and type in the two numbers you want for that domino, the first number appears to the left/on top, and the second number appears to the right/on the bottom. In this way 25 will appear as a different domino to 52. That’s about as easy as it could be unless you have fully mastered telepathy. Alternatively you can access the characters via the Character Set.
Please note:
You’ll need to enable Standard Ligatures for these domino faces to show as it is described above – which will require a program that contains Open-Type features. Modern graphics programs have this feature, and most enable it by default, with some you may have to enable it yourself. Basic text editors probably don’t have this feature whereas advanced Word Processing Programs probably do.
Also note:
There’s the full set of ASCII characters for standard letters, numbers and punctuation, but no accented characters, (there’s pretty much everything for English but not the extended set of accented letters for various languages and extra symbols we’d normally include in a font – it’s a font intended for giving Domino pieces and not for advanced Word Processing or Type-setting work.) But there’s enough there for any basic textual work – and you get the dominoes of course. The alphanumeric characters are taken from our Sanstone Semibold font.
To get two numbers like 34 to appear as numbers rather than dominoes, either switch Ligatures off, or type a grave accent (top left of the keyboard, to the left of the numbers row) which will allow the numbers to appear as two numbers together and not convert them to dominoes, (it will actually print a very tiny blank space between them that you won’t even see.)

Here is a preview of how Dominoes™ will look. For more previews using your own text as an example, click here.

No, every font we feature is a premium, paid-for font. Please don't waste your time looking for a free download of Dominoes™.

If you really want Dominoes™ then click here to visit the download and purchase page on MyFonts to get it with the proper license. The designer and publisher deserves to be paid for their work. :)