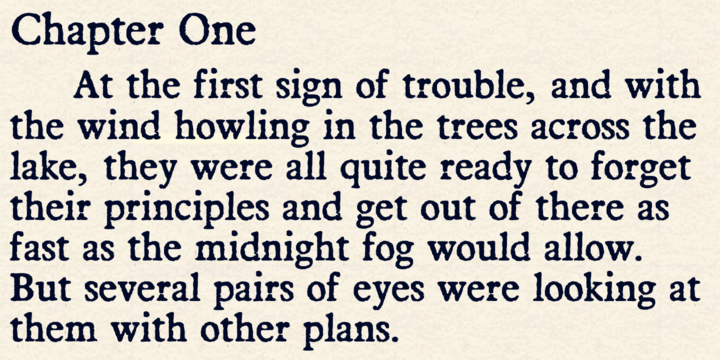 What is the Darnalls™ font?

Darnalls is a slightly badly-printed style of old-fashioned-book typeface. There is the standard version which has a little print noise (quite subtly in the Regular version, more noticeably in the Bold version); and a clean version which has virtually no noise or bits, just the slightly misprinted letters and numbers and so on. These 2 varieties both have the 4 standard versions of Regular, Bold, and their 2 italic counterparts. More…
There are special characters for most double-letter combinations in lower case, to avoid having two identical misprinted letters together (such as bb, dd, tt – 18 in total, all the combinations you are likely to need), plus another 28 characters for common letter combinations (such as cr, ad, er, ot, be, sp,) to give an element of variety to the text rather than having every misprinted ‘e’ or ‘a’ and so on look the same throughout, there’s 2 or 3 different variations of letter that are used, to mix things up a bit. (You can see, for example, in the small square flag accompanying this font that the two a’s and l’s in Darnalls are somewhat different, and the 3 n’s in the picture for the author Fickan Finn are all different). These are all activated by turning ligatures on in any OT-ready software (some programs enable it by default). You can also type some of these examples into the text-box on this webpage to see it, with ligatures set to on. And there’s lots of other OT features like historical forms, subscript and so on, giving plenty of variety to the characters. There’s a little more info in the zip file.
And of course there’s a full set of accented characters for Western, Central and Eastern European languages as you’d expect.

Here is a preview of how Darnalls™ will look. For more previews using your own text as an example, click here.

No, every font we feature is a premium, paid-for font. Please don't waste your time looking for a free download of Darnalls™.

If you really want Darnalls™ then click here to visit the download and purchase page on MyFonts to get it with the proper license. The designer and publisher deserves to be paid for their work. :)