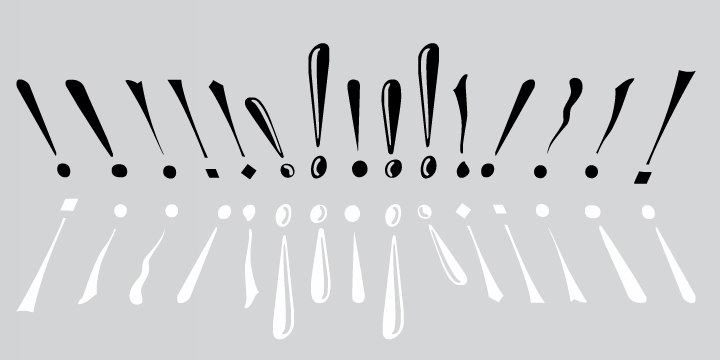 What is the Cooper Screamers font?

In 1925, at the request of Barnhart Brothers & Spindler, the foundry he worked for, Oswald Bruce Cooper designed a wide selection of “screamers”, oversized exclamation points used to grab attention in display advertising.
The foundry rushed the screamers into production, much to Cooper’s dismay. Cooper was disappointed with the final form of the screamers– they were designed in assorted weights to match the assorted Cooper series of typefaces, as well as in a variety of other formal solutions- squaredoff, incised, wavy, Tuscan, and rounded. More…
Cooper’s working design methodology was to re-draw his projects a number of times in order to refine the formal results. However the screamer project was hastily cut by the head of BB&S’s matrix engraving room in fourteen sizes from the initial sketches, causing Cooper to fire off a fiery missive stating, “Everything I draw is bum the first half-dozen times I draw it; the trouble with these is that I drew them only once!”
This typeface is the result of researching Cooper’s original drawings and series of engraved proofs for the screamers, as well as the original Screamer type specimen.
Cooper Screamers have never been available before in digital format.

Here is a preview of how Cooper Screamers will look. For more previews using your own text as an example, click here.

No, every font we feature is a premium, paid-for font. Please don't waste your time looking for a free download of Cooper Screamers.

If you really want Cooper Screamers then click here to visit the download and purchase page on MyFonts to get it with the proper license. The designer and publisher deserves to be paid for their work. :)