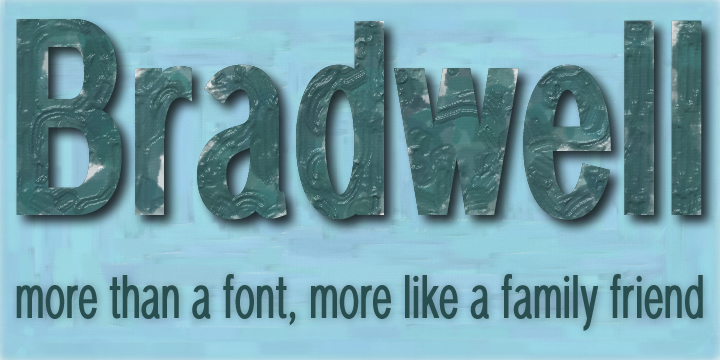 What is the Bradwell font?

Bradwell is a slightly condensed sans-serif in eight weights, including a few quite light faces and with fairly small increments between the different weights. We feel it has a fairly modern feel to it rather than a traditional one, and for a legible sans-serif it has its own style rather than treading well-worn paths. It lends itself well to modern graphic design of all kinds and is ideal for adverts and magazines, and any situation where a compact typeface would be best suited. More…
All these weights are full of Open Type features and a few extras, including of course Class Kerning and Ligatures, some useful pictorial/dingbat characters, bullet numbers as stylistic alternatives, ligature replacements, fractions, ordinals, an easy Euro sign and so on. Bradwell also supports Central, Eastern and Western European languages with its extended set of accented characters. More details about special characters and so on are in the zip files that are included.
All 8 weights contain symbols for various transport stations, (just type in *train* *bus* *plane* and so on with ligatures on, and it will do it automatically for you. There’s a gallery picture to show this.)
There’s also a Symbols font, which contains assorted symbols from the various weights but arranged on the letters and numbers rather than obscure unicode characters (typically with lighter versions on lower case, heavier on upper case) including a few which aren’t in the standard 8 fonts.
The zips contain both OTF and TTF versions – install either OTF or TTF, not both (to avoid incompatibility issues).

Here is a preview of how Bradwell will look. For more previews using your own text as an example, click here.

No, every font we feature is a premium, paid-for font. Please don't waste your time looking for a free download of Bradwell.

If you really want Bradwell then click here to visit the download and purchase page on MyFonts to get it with the proper license. The designer and publisher deserves to be paid for their work. :)