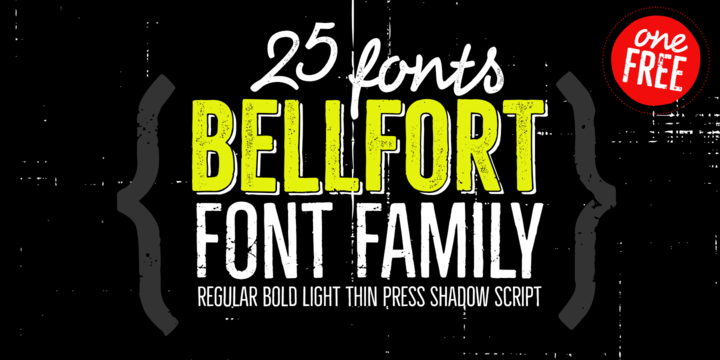 What is the Bellfort font?

Bellfort family features 7 different sub-families: Regular, Rough, Press, Shadow, Press shadow, Shadow Only, Script. Each of these sub-families contains up to four font weights.
When the font is used in OpenType-savvy applications, the 3 variants of glyphs are automatically alternated to achieve a random-like effect.
When not using the Contextual Alternates feature, you can still pick the alternates in the Glyphs palette or use the alternates available from the keyboard upper and lower case.
Bellfort Script is a handwritten, fully connected script with ligatures and contextual alternates to help with flow and readability. More…
Language support includes Western, Central and Eastern European character sets, as well as Baltic and Turkish languages.

Here is a preview of how Bellfort will look. For more previews using your own text as an example, click here.

No, every font we feature is a premium, paid-for font. Please don't waste your time looking for a free download of Bellfort.

If you really want Bellfort then click here to visit the download and purchase page on MyFonts to get it with the proper license. The designer and publisher deserves to be paid for their work. :)