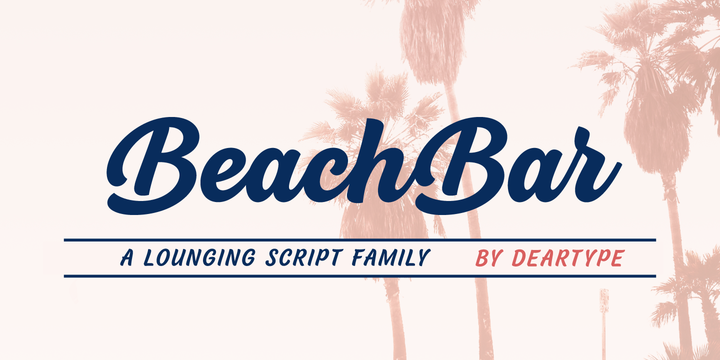 What is the BeachBar font?

BeachBar is a modern bold script with a sunny mood. It is inspired by, well, Beach bars, the summer and the sea, the hot afternoons with a cocktail in your hand and the sound of splashing waves.

Beachbar turns our love for summer into a dynamic and vivacious font that comes in three different styles to choose from:

All three styles come in six weights making the font versatile and useful both for web and print; think websites, posters, menus, logotypes, cards, signage, packaging and whatnot. BeachBar is friendly, sturdy and it makes a statement, but most of all, it is fun to play with.

Here is a preview of how BeachBar will look. For more previews using your own text as an example, click here.

“I’d like to think that my fonts are not fonts for their own sake, but serve a specific purpose,”

Veneta Ranelova, creator and sole designer of a font publishers called DearType. She comes from a branding background, where every design decision is grounded in brand strategy. Veneta tries to design fonts that convey a certain feel and clearly speak for the business / brand that they represent.

Veneta lives and works in the beautiful city of Sofia, Bulgaria. Veneta’s font foundry started out as a blog about typography.

Veneta’s love of typography first started through her job as a creative director at a branding agency.

“Even though we handle projects from different fields, I can say that selecting the right font is half of the job,” she says. “As time passed, I became convinced that font and color alone can create a striking impression and thus should always be a priority. I like how a font can tell a story on its own, which inspired me to give type design a try.”

Veneta has designed many great fonts over the years such as Brunette – the whimsical, handmade script that is humble and approachable. She also designed the modern, rough brush script Renovation. Her best selling font to date is LifeHack – a friendly, hand drawn casual script with lots of personality. Clearly there is much to look forward to from Veneta Rangelova.

No, every font we feature is a premium, paid-for font. Please don't waste your time looking for a free download of BeachBar.

If you really want BeachBar then click here to visit the download and purchase page on MyFonts to get it with the proper license. The designer and publisher deserves to be paid for their work. :)