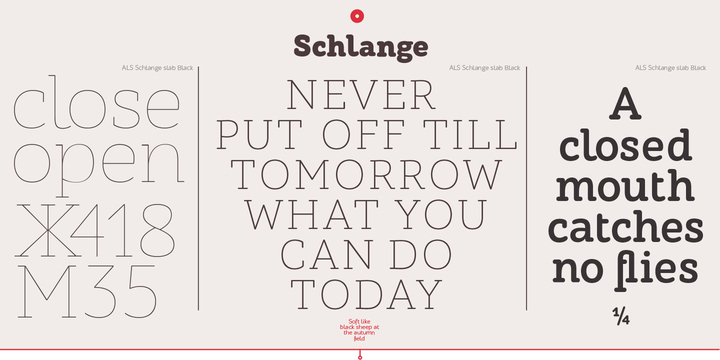 What is the ALS Schlange Sans font?

Schlange is a rich typeface with rounded terminals. The family includes five sans serifs and five slab serifs in weights from ultra liight to bold. Schlange’s personality is determined by an open aperture
and quite large lower case characters in comparison with the upper case set.
Schlange’s personality is open and friendly, giving a text it’s used for a soft, warm appeal. Schlange
will work well as a display type (think titles, short magazine call-outs, ad banners, and such), but it’s
not a good choice for extensive bodies of academic text. Available in numerous weights, the typeface provides rich opportunities for mixing and matching and is great for typographic compositions.
These qualities make Schlange a dream type for a packaging designer. It will feel at home in design
for cosmetics or sweets, postcards, children’s books and menus.

Here is a preview of how ALS Schlange Sans will look. For more previews using your own text as an example, click here.

No, every font we feature is a premium, paid-for font. Please don't waste your time looking for a free download of ALS Schlange Sans.

If you really want ALS Schlange Sans then click here to visit the download and purchase page on MyFonts to get it with the proper license. The designer and publisher deserves to be paid for their work. :)